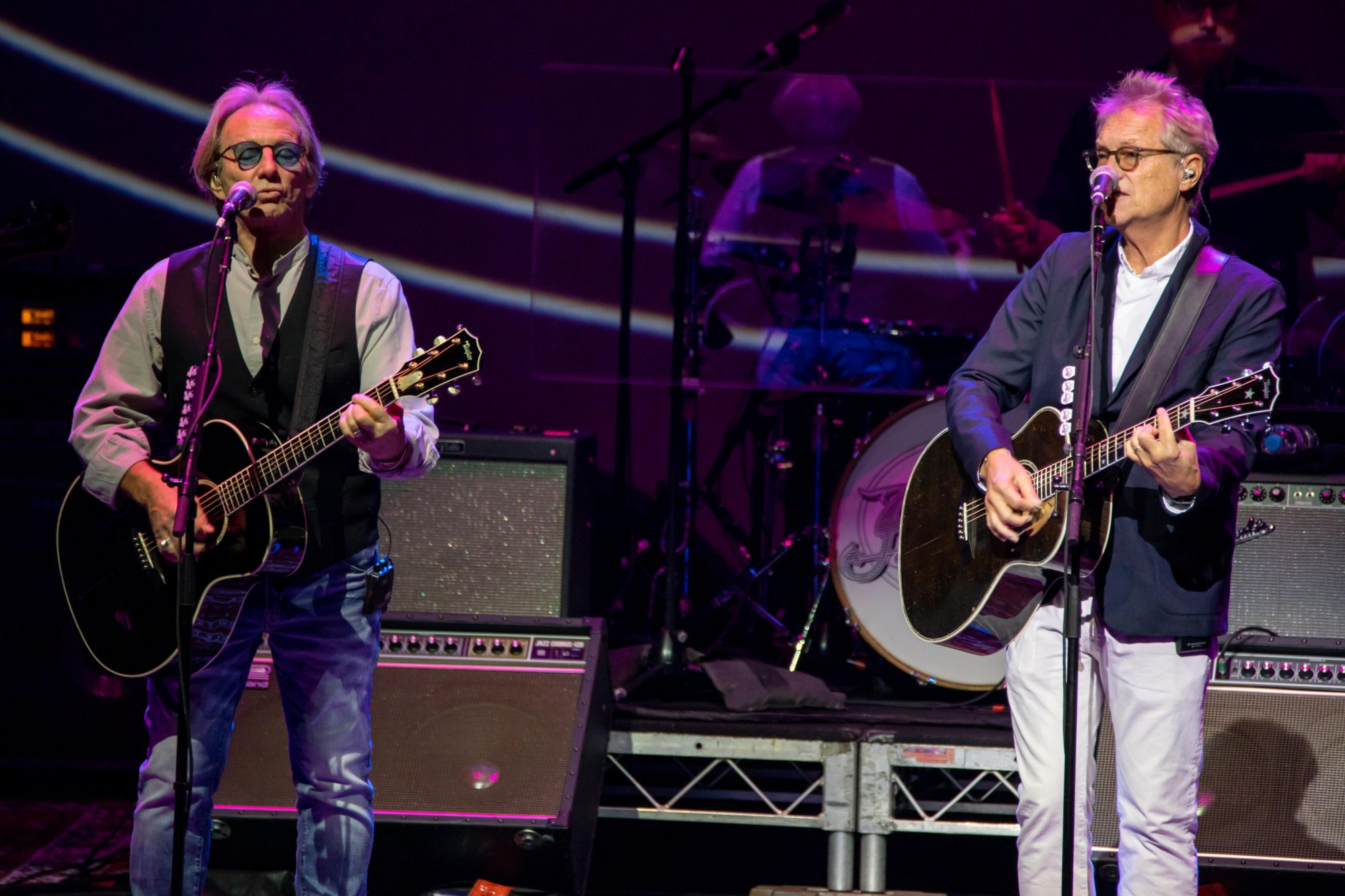 This was a trip down memory lane.

Born out of the revolutionary ’60s, America are a band who made a grand reputation for themselves as kings of the folk-rock scene. Often compared to the likes of Bob Dylan and Crosby, Stills and Nash, they peppered hit tracks across the 1970s and have become world-renowned for their live shows ever since.

For a band so grounded in the years of the past, the Palais Theatre was no doubt a perfect venue for their Melbourne show. With the wide stage decked out with numerous Persian rugs underfoot, it felt as though the band were setting foot into a hazy folk lounge straight from their old scene. At the sound of a rising orchestral sweep, the first montage of many projected animated versions of their past album covers across the backdrop, setting the stage for surviving members Gerry Beckley and Dewey Bunnell, along with their band, to enter.

The five-piece outfit burst into the acoustic rocker of ‘Tin Man’, a 1974 hit, which slowly sunk the audience into the format for the evening: one which was best enjoyed with a beer and a warm, relaxed posture. Following on with ’80s comeback single ‘You Can Do Magic’, the band demonstrated their tight musical prowess, with guitarist Steve Fekete perfectly executing that song’s sleek lead guitar licks.

The band endeavoured to play tracks almost chronologically from then on, touching on songs from many of the albums that brought them fame in the early ’70s. Occasional keyboardist Gerry Beckley performed the soft ballad of ‘I Need You’ in his typically nasal twang, lushly accompanied by the rest of the band with the full force of the iconic harmonies that they were originally known for.

America are a group that embody all that is good about their name’s country of origin, projecting music and image through their own rose-tinted glasses. The return of their montages really epitomised this. The road-tripping vibe of ‘Ventura Highway’ was accompanied by clips of surfing, driving up the Big Sur, and flashes of The Beach Boys themselves, while the riotous ‘Sandman” was heard with footage of hippies, Vietnam protests and Martin Luther King.

The debts to the past were not entirely repaid yet, as the band also gave their respects to the late and great George Martin. Famously known as the genius producer for The Beatles, not as widely known for producing America’s mid-’70s records. To show their thanks, a gloriously triumphant cover of ‘Eleanor Rigby’ ensued.

The group brought the night to a close with hits like ‘Sister Golden Hair’ and ‘Lonely People’, before capping off with an encore of the immortalised tune we all know and love, ‘A Horse With No Name’, providing the greatest singalong of the evening.

America encapsulate the best of their time and have given us the privilege see into what was once their very golden world.

Highlight: Their bonus cover of ‘California Dreaming’ was a welcome surprise.

Lowlight: Not much to complain about!

Crowd favourite: It had to be ‘A Horse With No Name’. For Mediterranean duo Enza Pagliara and Dario Muci, music is a means of preserving tradition 2020 APRA Music Awards to go ahead as a virtual event